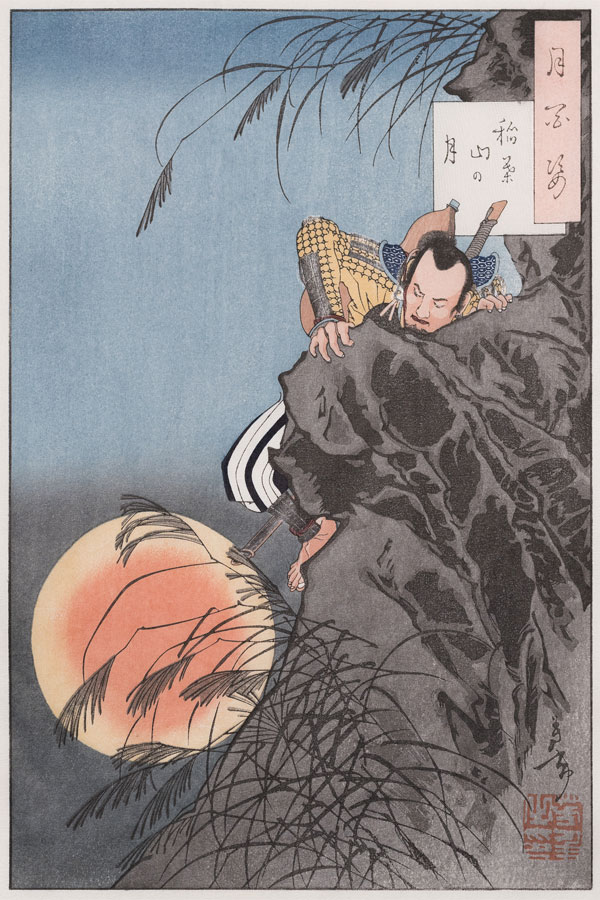 Eiroku 10 (1567). Oda Nobunaga was attempting to capture Inabayama (Mount Inaba) Castle in Mino Province, but found himself unable to force a surrender and was struggling to attack effectively.
To break the deadlock, Kinoshita Tokichiro (later to become Toyotomi Hideyoshi) is said to have led a small team of men up the mountain in order to launch a surprise attack from the far side of the castle.
The man shown dragging the enormous gourd is Matajuro, the younger brother of Hachisuka Koroku, one of Hideyoshi’s subordinates (‘Ehon Taikoki’ [A Picture Book of the Biography of Toyotomi Hideyoshi], page 8, volume 1*).
The gourd was to be raised up as a sign upon successful infiltration of the castle grounds.
*Iwakiri, Yuriko. Yoshitoshi: One Hundred Phases of the Moon, Tokyodo Shuppan, 1995.
Commentary on "One Hundred Phases of the Moon" : Mr. Kenji Hinohara – Chief Curator of Ota Memorial Museum of Art
Online shop