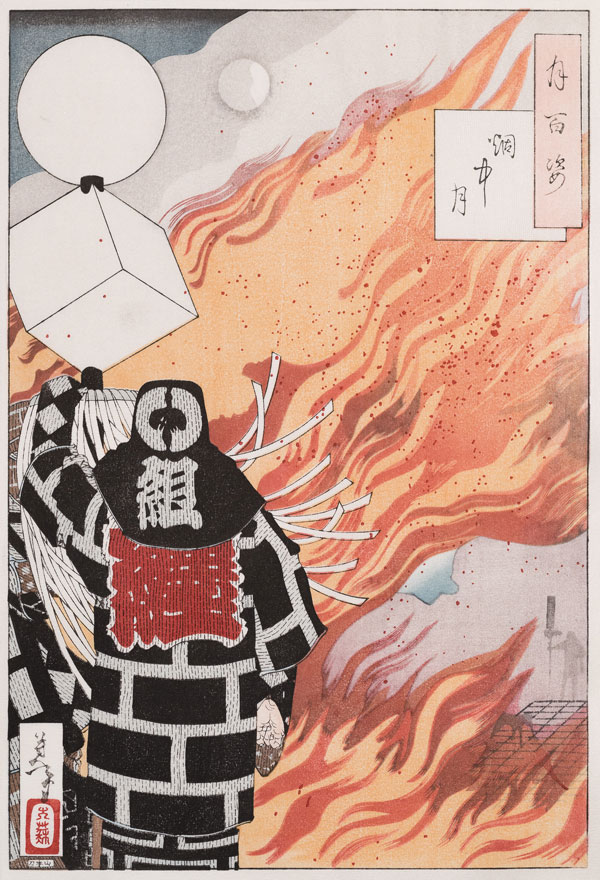 A town firefighter, from I Brigade, stands on the roof of a burning building, holding aloft his matoi (standard), made up of shapes recalling a keshi (poppy head) and a masu (measuring box).
The role of these matoi-mochi (standard bearers) was to get to the fire as quickly as possible, then stand as close as possible to its centre, matoi aloft, indicating where help was needed.
They were the most celebrated among all firefighters.
To the west of Sumida River, Edo was divided into 48 regions, each of which was assigned a brigade named after a single phonetic character: the Iroha Brigades.
The matoi-mochi were supposed to wave their standards in exaggerated motions, but this one stands immobile.
By deliberately removing any sense of movement from the matoi-machi, Yoshitoshi creates a dramatic contrast with the violent chaos of the flames.
Commentary on "One Hundred Phases of the Moon" : Mr. Kenji Hinohara – Chief Curator of Ota Memorial Museum of Art
Online shop