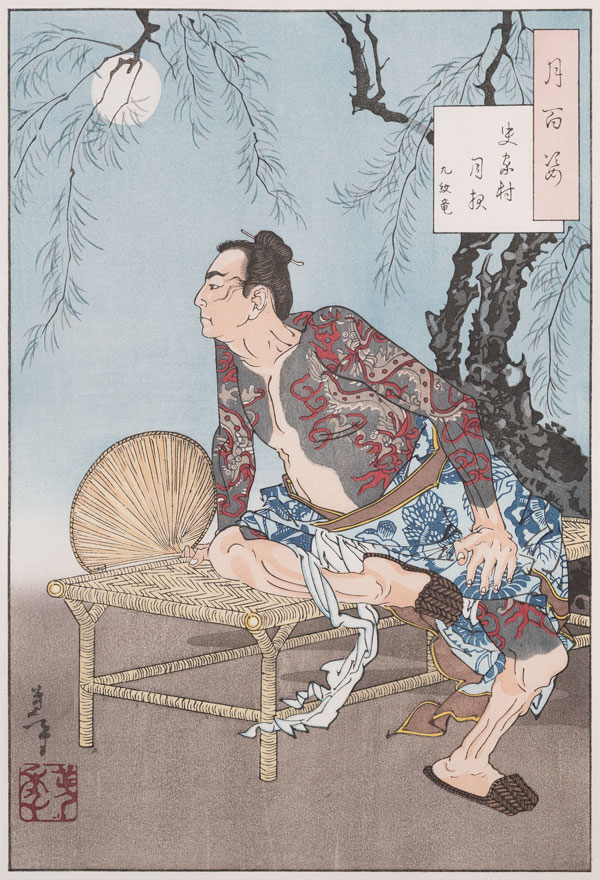 Kumonryu Shishin (Shi Jin) is a character who appears in ‘Shuihu Zhuan’ (Water Margin), an epic from Ming Dynasty China.
Shi Jin is a prodigal son, born into the family of a wealthy farmer in Village of the Shi Clan in Huayin County, who trains day and night in martial arts.
He is given the nickname ‘Nine Tattoo Dragon’ (Kumonryu) after the nine dragons tattooed across his body.
Shi Jin becomes village head after his father dies and, as such, is required to punish some bandits who tried to attack the village.
Instead, however, he befriends them. Once this is discovered by officials, Shi Jin is forced to flee from his ancestral village.
Here he is shown stripped to the waist, enjoying the cool of the evening.
He gazes into the distance, deep in thought.
Commentary on "One Hundred Phases of the Moon" : Mr. Kenji Hinohara – Chief Curator of Ota Memorial Museum of Art
Online shop